People are asking me for locations in the city where coronavirus may be present.  On March 28, 2020, the Nebraska Department of Health and Human Services determined that we have confirmed cases of community spread of coronavirus in the city.  This means that we must assume that coronavirus is everywhere.  Please take extra precautions using this assumption.   Please keep at least 6 feet of space between you and other people, wash your hands regularly, and do not touch your face.

In the mid 1800’s, an idea came to light to develop a city in Central Nebraska. This city would be situated along the Platte River Road, and the first settlers hoped that the central location of this city would be ideal for the relocation of the nation’s capital from Washington D.C. This dream was of course, never became reality.

In 1857, an expedition of 35 people set out from Davenport, Iowa, consisting of German immigrants. A banking house called Chubb Brothers and Barrows, of Davenport supported the group. They were instructed to choose their settlement’s location within an area named by French Fur Traders as “La Grande Island”, an island in the Platte River. In 1857, the group of settlers began their journey, arrived at their destination and began their settlement on July 4, 1857. By September, log houses had been constructed from ash, elm and cottonwood timber.

During the next nine years, these early settlers experienced great hardships common to this region of Nebraska, including blizzard conditions, and conflicts with the region’s Native American population. The settlement did not experience conflict within their territory, but the Sioux and Pawnee Indians engaged in heavy battle on the island, and left fear in the hearts of early Grand Island residents. 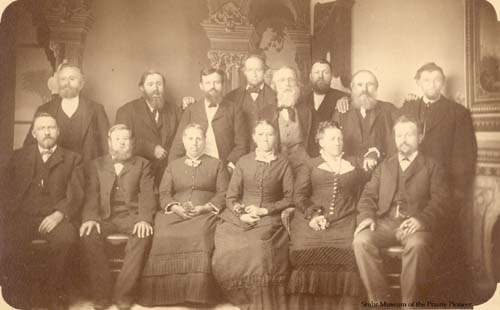 Stuhr Museum of the Prairie Pioneer

The Railroad Comes To Town

In the spring of 1866, the Union Pacific surveyors laid out and platted a town called Grand Island, which at that time had a population of 500. On July 8, 1868, the railroad extended to Grand Island. The first depot was set up as a tent, but construction soon followed for a combined depot and hotel. This railroad and the Overland Route contributed to significant growth for Grand Island. At that time, gold had been discovered at Pike’s Peak in Colorado. Thousands of people traveled to Western states in seek of great fortune. Everything that Grand Island sold was offered at high prices, bringing financial gain for its merchants. By 1870, the census reported that Grand Island’s population had grown to 1,057 people.

In 1872, meetings were conducted to discuss the town’s organization. A final meeting was held on November 28, 1872, in which a petition was presented to the commissioners. Members of this commission included George H. Thummel, O.A. Abbott, A. Thorspecken and Henry Koenig. After review, the petition was granted for incorporation. The first board of trustees included John Wallichs, R. Chapman and Christian Wasmer. The town’s incorporation included a name change—what was known as Grand Island Station was from here on called Grand Island.

Other government growth occurred rapidly over the next few years.  The Hall County Court House was built in 1873, and the first fire company was organized on June 8, 1874.  Two years after its organization, the fire company had 25 members.

In 1881, an office was rented by the City Clerk and City Council at a rate of $50 a year.  Because City officials opposed renting, a decision was made to construct a City Hall.  It was decided that the structure would be added to the existing Fire Station.  In 1878, the City had purchased the south 44 feet of a lot at Second Street and Pine Street as a site for a Fire Engine House.  The land was purchased from the Methodist Episcopal Church Society for a sum of $300.  An addition was constructed to the Fire House in 1882.  It served as the City Hall and was used for City Council meetings and other business.

Several newspapers also developed in Grand Island during the 1880s.  The city’s first newspaper was the “Platte Valley Independent”, established by Seth P. and Maggie Mobley.  The Platte Valley Independent was a weekly paper, and referred to as a Republican paper.  Another paper also considered to be Republican followed soon after, entitled “Grand Island Times”, and was owned by Charles P.R. Williams.  It began as a weekly paper and later scaled down to semi weekly publishing's. A third semi-weekly paper was developed for the German population.  It was an eight page, six column paper established by Henry Garn and Charles Boehl.

During the years between 1874 and 1878, Grand Island suffered a set back.  The development of railroads throughout the country brought in additional settlements in the Nebraska territory.  As these settlements established themselves and were successful, new towns developed.  These new towns detracted from Grand Island’s bountiful trade appeal, and their range of coverage for trade was cut off significantly.  In addition, grasshoppers took over in the Central part of Nebraska and destroyed crops, causing financial distress.  These difficult years were followed with significant, positive growth.

1880 brought a turn-around to the economy of Grand Island.  Early in this year, a large-scale of residential lot sales was instigated.  Sales totaled $80,000, and 157 buildings were constructed.  More railroad construction added to the traffic coming through the City.  The Grand Island and Hastings road was completed in 1879, which connected the City to the Republican Valley Counties.  In 1884, Burlington opened a branch line from Aurora to Grand Island.  By 1886, it continued to Anselmo, Nebraska, and by 1887, to Whitmen, Nebraska.  This outlet stretched 200 miles northwest.  Also that year, the Burlington line was extended to Billings, Montana, where it connected to the coast with the Northern Pacific and the Great Northern lines.  The extension of these railroads contributed significantly to the growth of Grand Island, as both a commercial and industrial center.

With the addition of railroads through 1884, factories began to function in Grand Island.  Among the first was a cigar factory, which was owned and operated by John Schlotfeldt.  It opened in March of 1881, and was located at 308 West 3rd Street.  The facility consisted of an assembly area, as well as a retail area where the products were sold.

H.A. Koenig established the State Central Flour Mills in 1867.  The mills were powered by steam and produced large quantities of flour.

In about 1890, sugar beets were introduced as a crop in Nebraska, and a sugar beet processing factory was built in the southwest part of Grand Island.  This was the first sugar beet factory built and operated in the United States.

Many other factories contributed to the financial growth of Grand Island, including a patent medicine, soap, steam laundries, furniture, bottling, broom, brewery, canning and milling factories.  As the industries were developing and thriving in Grand Island, the business district also grew, and banking institutions were developed.

Beginning in 1884, public enterprises were established.  The waterworks owned by the City of Grand Island, were built in 1885 and opened for service one year later.   The Gas and Electric Light Company was developed in July, 1884, and the Grand Island Gas Company on March 21, 1887.  The Grand Island Light and Power Company was built in 1895 and expanded in 1897.

In 1887, an inner city railway was constructed to transport citizens from their homes in the suburb areas to the business portions of the city.  The growth of Grand Island prompted the addition of this service.

Four years after the invention of the telephone, the first telephone exchange was built in Grand Island in 1880, and it boasted 64 subscribers by 1884—25 were residence phones and the rest were occupied by businesses.  By 1892, there were 103 subscribers, and in 1893, a toll line was built to Lincoln.

Schools and Churches are Established

The first church to be established was the Catholic Church.  Father Ryan of Columbus traveled once a month to Grand Island to conduct mass.  The first church was built in 1868, and destroyed in a tornado two years later.  The church was rebuilt on the corner of Second and Walnut in 1877.

The first public school was located in a one-story building on Second Street, across from the City Hall block.  O.A. Abbott is credited with teaching the first public school in this building.  The first building built as a school was located in block 81, and given the name “Dodge”, after a railroad engineer. Howard and Wasmer Schools followed in 1884 and 1886, respectively.  In June of 1883, the first commencement of Grand Island High School took place with five graduates.  Interest also developed for post secondary education, and the Grand Island Business College opened its doors to its first students on June 8, 1885.  Grand Island College, established by the Baptist Church of Nebraska opened as an academy in October of 1882.