People are asking me for locations in the city where coronavirus may be present.  On March 28, 2020, the Nebraska Department of Health and Human Services determined that we have confirmed cases of community spread of coronavirus in the city.  This means that we must assume that coronavirus is everywhere.  Please take extra precautions using this assumption.   Please keep at least 6 feet of space between you and other people, wash your hands regularly, and do not touch your face. 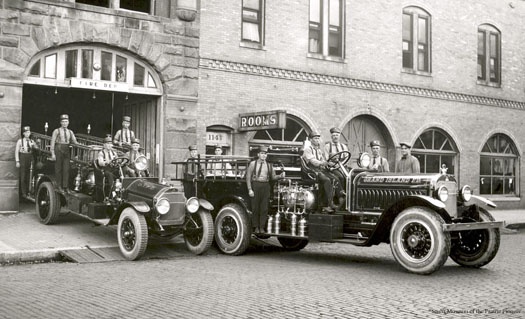 Grand Island Firemen pose in front of the old City Hall Fire Station (200 block of N. Pine Street). The fire truck at left was the first motor-driven vehicle used by the Grand Island Fire Department. It was purchased in 1913 from the Anderson Coupling and Fire Supply Company for $4,150. The chemical-hose truck had a six-cylinder, 75-horsepower, water-cooled engine. The truck at right is a Stutz purchased in 1921. Note that both trucks have right-sided steering. Steering wheels were traditionally on the right side of early fire trucks. This afforded the driver a better view of the fire hydrant he was headed for.